As Pride Month comes to a close, New York City prepares its biggest party yet. Every year, most streets in Manhattan are blocked off to make way for massive floats filled with people wanting three things: Love, Freedom, and to spread joy through dance and music. 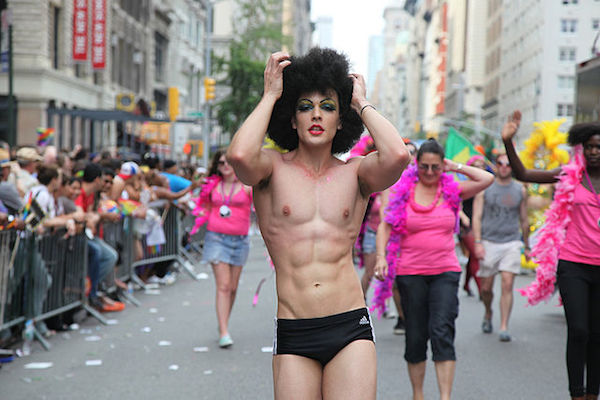 My parents would take me to all pride parades as a kid.  It was something that excited me, and intrigued me.  So much love and support flowed through the streets, and when I saw my first drag queen, I was in awe of her beauty, and never questioned if she was a he, why is he dressed as a woman.  I automatically accepted it,and thank my parents for teaching me acceptance through exposure of these parades.

still attend pride parades; whether it be at my hometown of Huntington Long Island, or in NYC.  I love the sense of acceptance, and throughout the years, I got to know what music is popular in the LGBTQ co

mmunity at the extravagant parades.  Music must be upbeat, danceable, and relatable to positive outlooks of life! We all have to dance, or we are forced to dance, no if’s, ands, but plenty of dancing butts. We cannot let hate win, and our demonstrations are showing that we are not giving up!

For 2017, here is what I think you, the parade-going LGBTQ supporting lover, should listen to while getting ready for the greatest parade evah!

Mama Ru never disappoints!  This song brings us back to 90s techno with that extra sauce of positive lyrics to feel your real self.  In the video, She does an excellent job of featuring her top 3 of season 8’s Ru Paul’s Drag Race, the show that made Herstory for embodying a competition environment with REAL-ness of drag queens feeling their real selves.  So be you, Dance like you, and spread this groove to all your friends and peers.

After the horrific events at Pulse Nightclub on June 12th, 2016, the LGBTQ felt broken. How can we enjoy our lives when someone can come into a safe-haven and kill us, threaten our way of life with hate? Sia’s Music Video for “The Greatest” is an homage for those who lost their lives in the Orlando Shooting, and became a song that praises the feeling to be your greatest self.

“Americano” was influenced by the events surrounding the repeal of the controversial California Proposition 8—a ballot proposition that defined marriage as a union between opposite-sex couples, thereby prohibiting and invalidating same-sex marriage throughout the state—as well as the growing struggles of Mexican immigrants. Lyrically, the song talks about a lesbian themed romantic relationship. This song is an anthem for those who are immigrants, trying to find love without oppression. Gaga’s catchy lyrics with a latin-techno beat makes it impossible not to dance to, and to remind us that we have come so far, but still have ways to go…so keep on supporting!

A slow country jam, but dedicated to the LGBT community from the talented and sassy Miley Cyrus.  Her performance of this song at Washington Pride showed her love for her community from “the bottom of my bedazzled heart”  Her way to create a song with a country feel and a great back-up to her community might pave way for those who listen to country and don’t comprehend the LGBTQ community, to finally listen, and hopefully understand.

Helloooo Shamir! This artist is getting pick up for their electronic pop sound, and their “no f**ks” attitude. Shamir does not define themselves as a gender“I have no gender, no sexuality, and no fucks to give.” (Bust Magazine) Shamir Bailey’s jam “In For the Kill” will make you jam out of your bedroom and right into the street, ready to fight for love in the streets!

Have any artists/songs you jam out to before Pride Parade? Or even before going to the club or a drag show?  Let me know in the comments!

4 thoughts on “Top Five Songs that I am Preparing for NYC Pride Parade…and You Should Too!”