Anna/Kate band describe themselves on their pledge music debut album campaign as “two queers and a ukelele becomes a 6-piece band.”  But believe me, they are so much more than just that.  I saw them live for the first time in March of 2017.  They played in a Manhattan furniture store close to Union Square in a Sofar-esque type of show, where friends, family, and fans came together in a warm atmosphere of comfy couches, mood lighting, wine, snacks, custom-made merch in mason jars, and a theatrical layout of paper boats, interactive hand-written poems, and candle-lighting.

I was introduced to the band via a mutual friend and musician, cellist Temi Hason, who also plays in the band.  After witnessing that first performance, I knew I had seen something special.  That’s why when I attended the band’s Pledge Music Album Release Show (a pre-release and show for ultra fans who buy the album before it’s released to the general public) this past Saturday, I was beyond excited. I knew I was in for a real treat.  And the result? To put it simply:  MAGICAL.

On Saturday, Nov 18, 2017, on the 3rd floor of a beautifully artistic, eclectic space known as the Artist Co-Op, and after a delicious opening set by fellow New York City singer/songwriter Katie Lee, (who performed with guitarist/vocalist Sean Cronin,) Anna and Kate took the stage.

They were joined by the members that make-up their 6-piece band: Temi Hason on cello, Mark Harad-Oaks on Guitar/Banjo, Kelly Wenof-House on bass, Bryan Clark on percussion (with a 1-song debut on bass!) and Megan Foster on harmonies.

As they did in the first venue I saw them perform at, Anna and Kate used the entire space. With a love and background for theater, no talent goes unused.  Everyone was handed a “goodie-bag” on a brown paper bag upon entering the venue, with #HowToHold written on the outside. Inside mine was a candle light, and clear plastic cup. Others had bubbles, and party horns. I felt like a kid again. I loved it.  I knew even before heading to the Artist Co-Op that this performance would be special, and I had that childlike excitement in my stomach that only kept growing. After taking a goodie-bag, I went in through the door and right away experienced that warm, familiar feeling, as if I had come to a family gathering.  It was a room full of strangers, but it didn’t feel like it.  In the far left corner, in true celebratory fashion, there was a large table of what seemed to be an endless supply of edible yummies, including homemade cookies, cupcakes, crackers, cheese, snacks, and wine. The merch table had many items that I purchased, including the album, a “How To Hold” T-shirt, the large concert poster (created by Jon Irving) of the fantastic album cover, and I snagged a few free stickers.

My favorite part of the set-up, though, was the listening area.  Next to a lit-up mini “Anna/Kate Band” marquee, Kate had set up her laptop with songs from the album, and Anna had made a hand-made mini-book of writings, musings/poems, that I flipped through while listening. There was also a photo album (with actual printed photos!) of the band making the album, behind-the-scenes photos of the band in the studio, live concerts, and wonderfully goofy selfies.  The entire set-up was engaging, endearing, and added yet another tactile interaction with the audience, which I believe is definitely a plus in this increasingly digital world. 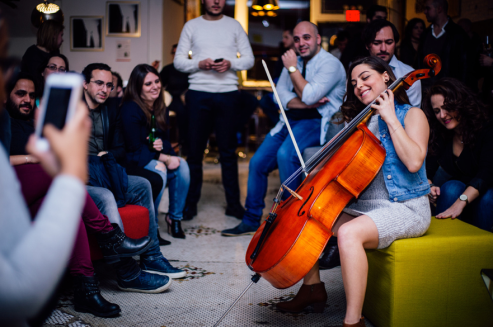 Besides the common denominator that each musician (including Anna and Kate) is a talented bunch of well-versed musicians in their own right, it is the combination of the band, PLUS the audience, is really what makes Anna/Kate band so special. The audience is very much the “7th member” of the band, with an age range of 2, to 80-somethings.  Their performances create a vibe of pure joy, feelings of togetherness, love, and community.  Listen to their album, and you know it’s special, on its own.  “How To Hold” (out March 2018) is a true folk-pop gem. But when it comes to seeing them live, they’ve definitely found the secret formula:  Anna/Kate Band plus YOU, equals pure magic.  Here’s how it all went down:

When the show started, Temi came in the door with a suitcase, and acted her lines.  Kate began singing from the stage, and Anna began singing and playing her ukulele from the other end of the venue.  Their trademark paper hand-made boats decorated the floor, all around us, with candle lights. When the music began, it was almost, well… orgasmic.  Their harmonies were flawless.  Their songs: emotional, crafty, intimate.  The production, nothing short of spectacular. Anna and Kate are not ones to shy away from detail when creating their art, and in the case of their concerts, is truly a production/an experience to be had.  Their first single, “I Run With You,” which was 3rd or 4rd in the set, erupted in a standing ovation from the crowd. Bryan, the percussionist, got a special Birthday shout-out before making his bass debut on a song, in full birthday regalia that the band surprised him with when they put a crown on his head and a flashing star necklace around his neck.

I listened to the concert while enjoying red wine and cookies, and couldn’t wait to see when the goodie bags were going to be incorporated in some fantastic way.  When we got to that part of the show, they had us (those of sitting close to lamps) turn off all the lights.  We were asked to open up our bags, and turn on our little candle lights.  At this point, Anna and Kate had us in a dream-like state, and the song they played then I believe was “Shipwrecked (in my motel room.)”  What a moment.  Nothing else mattered at this point.  The hustle and bustle of New York City didn’t exist. It was only us, and only them. And following this, when the lights were back on for the last song, “Even Over Odd,” it was a full sing-along, everyone standing, with our candle lights, bubbles, party blowers, and champagne in hand. We’re dancing, we’re singing, and we’re family.