New Yorkers, you know as well as we do that there is no shortage of live music in this city. 6/8 Music’s home base boasts some of the most iconic music venues in the world, from arenas to the tiniest dive bars. So with all these incredible gigs going on every night, how does one even begin to figure out which shows to hit? Fret not, 6/8 blog readers, because we’re compiling all the must-see shows in the area this month. And as an added perk, they’re all headlined by women/non-binary artists. You’re welcome.

Now without further adieu, here are 5 shows you don’t want to miss during the month of May!

Festival-lovers take note, Women Who Rock festival is happening May 10, in Pittsburgh, PA! Although this event is the only one on our list not close to the NYC area, any event that features women is near-and-dear to our heart.  (After all, it’s the summer season… why not take a road trip?) Furthermore, Women Who Rock is an annual concert that will benefit Magee Women’s-Research Institute, a wonderful organization who is becoming the world leader in women’s health and reproductive sciences.
The line-up includes all female-fronted bands, including a very special VIP appearance by Sheila E., and featuring performances by Karya Duo, Molly Alphabet, Lyndsey Smith, emceed by Michelle Michaels of WDVE 102.5FM.
All VIP tickets have sold out, so act fast!  General admission is $40, and can be purchased here.

One half of electronic duo The Knife, Swedish experimental electronic music artist Karin Dreijer Dreijer is the creative mind behind the ever-eccentric and ever-progressive Fever Ray. Fever Ray released their second album, Plunge, in October of last year. The album made an undeniable and irrevocable splash, with its eclectic soundscapes, larger-than-life visuals, and unapologetic lyrical thematics such as sexuality and agency. Now, alongside a fully female band, Fever Ray is putting on their first US shows since Plunge‘s release.

Additionally, at 5:30 PM before the show at the venue, Bunny Michael and Fever Ray will conduct a talk titled “Self Care & The Artist: A Talk on Compassionate Creative Practice”, and everyone with tickets to the gig has access to the talk. So act fast, get your tickets to the body-and-soul experience of a Fever Ray concert here. 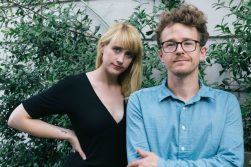 Duo Jenn Wasner and Andy Stack make up Wye Oak, a band that makes rich, earnest indie rock and puts on one hell of a live show. Wye Oak put out one of our favorite albums so far this year, The Louder I Call, The Faster It Runs, and we can only imagine that those songs would sound even more incredible in a live setting. This band excels in creating vivid, atmospheric music that feels deeply refreshing and new. As an added perk, one of our favorite acts, Torres (who was featured in the very first edition of our new music blog series, Mood Ring Music) is one of the show’s openers, so if you grab tickets, be sure to get there early! For further details + tickets, click here.

Speaking of favorite albums of the year so far, indie rock band Speedy Ortiz’ Twerp Verse very easily makes the list as well, even though it was only released a few weeks ago. Speedy Ortiz make brilliantly fun and exceedingly clever rock music that’s best to let wash over you in waves. The band doesn’t shy away from hard topics, from inner struggles to the sharp pain of our current political climate. Catch them on May 17 at Music Hall of Williamsburg, opened by another one of our favorite up-and-coming acts, the wry and honest punk rocker gobbinjr. Get your tickets here.

We hate to make you choose between Speedy Ortiz and this next act, but since we at 6/8 absolutely love both, we had to make sure that both made the list. If you’re looking for an unforgettable, politically-charged bender of a show, head on down to Elsewhere in Brooklyn and catch Pussy Riot on May 17. The Russian punk band is far unlike any other, but their unbeatable energy and pointed, artfully harnessed rage has drawn audiences across the world. Pussy Riot shows are art performances, but just as much, they are calls to action. With an opening performance from rising queer pop star Dorian Electra, this show is bound to be an incredible one. Join the rally and grab your tickets here.

Looking to learn more about these incredible acts before you head out to a show? Check out our Spotify playlist below, which includes music from all the acts listed above.