LA-based singer-songwriter Drea proves that music can (and should) be bigger than the person singing it. Pulling inspiration from limitless genres and styles, this pop songstress uses her distinctive voice to lift up topics like sexism, racism, and violence among so many more, making for catchy electro-pop with a clear and powerful message. Drea’s music isn’t the only thing that has us so inspired: her message extends beyond her melodies, into her movement. Drea is a seasoned dancer who created Reclaim Movement, an open level dance class working to empower women who are survivors of sexual assault, out of a desire to process and heal her own personal traumas through the power of dance. Needless to say, we’re utterly moved by Drea and her multi-dimensional artistry.

Without further adieu, here’s our chat with our #WCW, Drea!

For those who are unfamiliar with your music, how would you describe your musical style?
My new music is definitely still electro-pop, but it is less dance pop than my debut EP “No Vacancy”, which was released in 2016. You will hear some of the most gut-wrenching honesty from me this time around, and I’m so excited about that. My producer Kayja and I worked together to bring in some cool, dark electronic elements to the tracks, as well as live instrumentation on all the music we will be releasing together. That honestly probably doesn’t answer your question, ha. As far as artists I sound like, I can’t really place anyone. I don’t know if that means my sound is unique, or if I just haven’t listened to many artists with music like mine. If you listen to my music and think of anyone, let me know and then I can give a more definitive answer in my next interview, ha!

When did you first get into music? What was the catalyst to start making your own?
I come from a musical family, so I was raised with a lot of music in the house. My dad was a band teacher and loved to sing, and my mom ran a piano teaching business out of our home. I don’t think there was ever a true catalyst to me starting to make music, it was just second nature. I remember writing my first song at 7, but music was a part of my life long before that.

Who are some of your biggest musical influences?
It’s hard to pick out specific influences that can be identified in my sound, because the range of music I listen to and appreciate is so varied. I will say I’ve been heavily motivated by the shift I’m seeing in artists around me who are truly saying something with their music. All music has a purpose, but I have been really inspired by those artists who are using their platforms and their songs to address things like gun violence, mental illness, racism, and misogyny. At the core of it all, I believe that’s one of the most important things an artist can do – speak out for those who can’t.

If you could duet with any artist, dead or alive, who would it be?
Oh man. If I could even get in a ROOM with Michael or Janet Jackson, my life would be made.

Our first glimpse of your music was from the song “Hometown”, which we absolutely love here at 6/8 Music.  Can you tell us more about how that song was created?
Thank you so much! “Hometown” was actually written about two years ago now. I was working on my “No Vacancy”, and needed a creative break, so I met with my current producer Kayja to let off some musical steam. He played a track for me, and I just freestyled over it. When I was dropped by my manager a year later, I wasn’t about to give up. I knew it was time to give “Hometown” the attention it deserved. I reached out to Kayja and told him, “We’re making this a single!” We met up, I listened to all the takes, pieced together a song, rewrote what needed rewriting, and now, two years later, it’s out in the world!

Besides being an excellent musician, what’s a secret talent or hobby that you have?
Not sure about any “secret” talents, but I do love to dance. I also am fond of blogging, and draw from time to time. I guess what surprises people most is when I tell them I used to breakdance when I lived in the UK. I was on a crew and battled every Tuesday night at a local bar in Nottingham. I can still do some freezes and headstands! 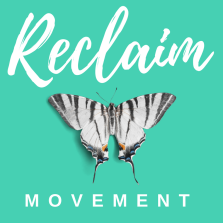 You’re the creator of Reclaim Movement, an open level dance class working to empower women who are survivors of sexual assault. We absolutely love the work you’re doing, and we’d love to learn a bit more about it!
A survivor of sexual assault myself, dance and music were instrumental in my healing process, and in reclaiming ownership of my body and my sexuality, and to process my PTSD symptoms.

I also found that there were few truly “beginner” dance classes for adults in LA. I’ve been dancing since I was 4, and I honestly can have trouble keeping up in the beginner classes out here.

With these two things in mind, I knew there were many women out there who, like me, fell into one or both of these categories. I wanted to create a safe place for women to explore dance and healing in Los Angeles. I currently run a women-only class every other week in North Hollywood. We listen exclusively to empowering music by female artists.

I am currently studying to become a Self-Defense Instructor, and look forward to bringing these classes to Reclaim Movement soon.

Tell us a bit about the benefit concert you held on May 20th — we hear it’s your first!
The For Her Concert Series is my other baby, ha. I wanted to create a unique concert series that supports women in four ways: curating and providing a platform for female artists and musicians, recruiting a female crew, including a female sound engineer and photographer, supporting a female-owned business as our host space, and finally, by focusing our efforts to benefit women in need.

Our first event was on May 20th, hosted at female-owned TeaPop in North Hollywood, and benefitting The Ladybugs Movement, a non-profit campaign that works to improve the health of homeless women in Los Angeles by increasing access to hygiene products. Instead of a cover charge, we asked for product donations, and accepted financial donations, as well. We were able to raise almost $200 and six 13-gallon bags of product donations, which will all go directly to hygiene kits that will be donated to women’s shelters in Los Angeles.

What was your favorite experience thus far on your musical journey?
Walking the red carpet for the She Rocks Awards with the Women’s International Music Network was definitely a highlight. I also loved being asked to perform and speak at a benefit concert with Hollywood Lights Orchestra. These two events both happened in early 2017, and helped me realize that I don’t have to be famous, or rich, or a Billboard-charting artist to have a voice and make an impact. This shift in my mentality and attitude laid the groundwork for Reclaim Movement, the For Her Concert Series, and the music I will be releasing later this year.

What does it mean to you to be a woman in music? Any advice for other female artists out there?
I think being a musician and songwriter in general is a very powerful thing. Everyone listens to music. EVERYONE. You go to an airport, and everyone has headphones in, no matter where they’re going, no matter where they’ve come from. Music is incredibly influential in our moods, our ideas, what we consider normal, what we aspire to.

That being said, being a woman in the music industry poses some extreme challenges. We deal with a lot of discrimination, over-sexualization. There just aren’t the checks and balances there are in other industries. The music industry is very casual, very personal, and it runs after business hours in rooms filled with men, booze, and drugs.

So, what I would say to fellow women in the industry is this:

This can and will mean different things to each individual artist, but in essence – don’t sell yourself short because of what a manager, a studio owner, a producer, a PR person thinks you should do. Don’t let anyone talk down to you because you are a woman, or treat you with disrespect, like an object. Walk out of those rooms. Find the people who will support you and believe in you without asking for sexual favors or silence in return. Know your stuff so no one can easily take advantage you. Understand the business, the technology. Do as much as you can on your own. No one will care about your career like you do.

Don’t limit yourself. Find your voice, and know that you don’t need permission to use it. In my opinion, you have a RESPONSIBILITY to use it. No matter your goals, your path, in the here and now, if you are making music, you have something to say, something someone needs to hear. Don’t wait.

Know yourself, know your worth, know what truly brings you joy, so you don’t limit yourself.

And as an added treat for any interested LA locals, Drea will be teaching a Reclaim Movement class TONIGHT 8-9:30pm PST at Studio C at West Coast Dance Theatre in North Hollywood. Click here for more details!